Chemical Biological Radiological Nuclear & Explosive (CBRNe) incidents, whether accidental or terrorist-based, can have a high impact on society. PROACTIVE aims to increase practitioner effectiveness in managing large and diverse groups of people in a CBRNe environment. 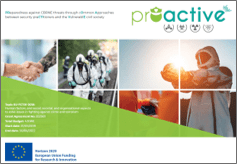 The main goal of the PROACTIVE project is to enhance preparedness against and response to a CBRNe incident through a better harmonisation of procedures between various categories of practitioners, and a better understanding of the needs of vulnerable citizen groups. Click on the PROACTIVE leaflet for more information.

behavioural issues associated with responding to a CBRNe incident and potential shortcomings in existing practitioner procedures and tools with respect to vulnerable groups.

real-time communication and collaboration with the use of new tools such as mobile apps for better situational awareness and better response coordination.

human-centred recommendations for EU standards concerning the integration of CBRNe technologies and innovations that are better adapted to the needs of all citizens. 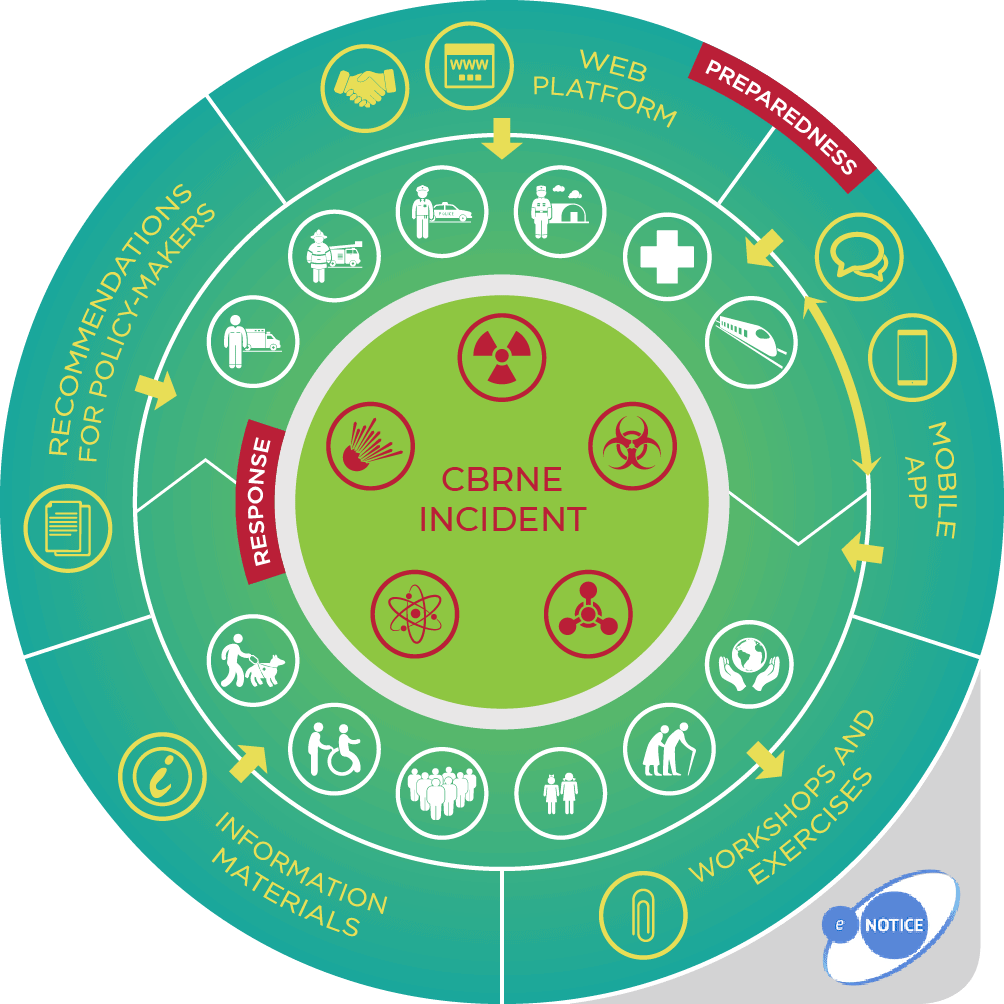 The project activities and research methods include several systematic reviews, surveys, focus-groups, workshops and field exercises for which the PSAB and CSAB will provide valuable insight.

Liaising with the eNotice H2020 project, three joint exercises are planned. During these, we will test the usability of existing procedures and tools developed within PROACTIVE. This will provide innovative recommendations for policy-makers and safety and security practitioners.

PRACTITIONERS: these are Law Enforcement Agencies (LEAs; typically Police organisations), First Responders (e.g. civil protection agencies, fire brigades, ambulance) and related stakeholders including private and public bodies, transport and logistic operators, etc. who may be involved in a response in support of the official responders and international, national and municipal authorities and civil society organisations such as those that help persons with disabilities and crisis management. (From the latter perspective, ‘Practitioner’ may also include personnel who were not specifically trained for CBRNe response or CBRN decontamination procedures, such as railway staff at a railway station or a doctor who might be caught up in the incident).

CITIZENS: these are members of the public but specifically including citizens with needs that differ to the average population such as persons with disabilities, the ill (e.g. with chronic or acute health conditions), elderly, or members of an ethnic minority or of a vulnerable group. Vulnerable groups may include children, pregnant women, persons with disabilities, chronic medical disorders or addiction, older persons with functional limitations and health restrictions, institutionalized individuals as well as their carers and companions. Vulnearable citizens also include persons with limited proficiency of the respective national languages or with restrictions regarding use of transportation.

TOOLS: these include processes, software, procedures, machine, mechanism, apparatus, appliance, piece of equipment and contraption.  Several tools can be regrouped under a toolkit dedicated to a specific target group.

PROACTIVE will result in toolkits for CBRNe practitioners and for civil society organisations.

The expected results are in line with the the overall Security Union approach to fight crime and terrorism. Our results will provide valuable inputs to the EUROPOL initiative to develop a knowledge hub for CBRNe activities and help consolidate the EU Action Plan to enhance preparedness for CBRN threats. 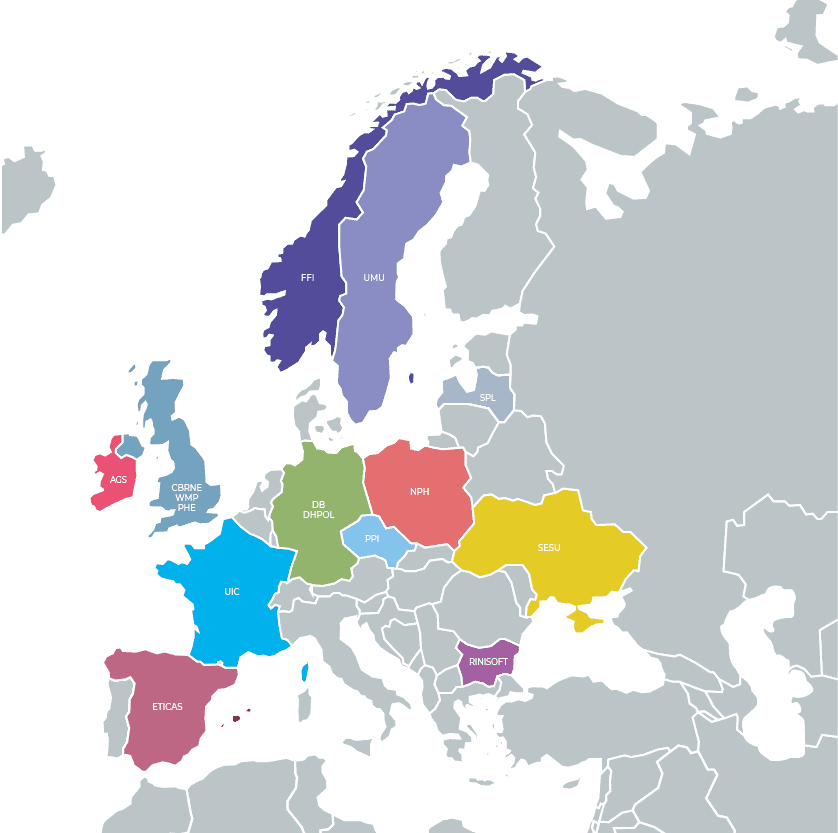 The consortium is reinforced through a large Advisory Board which is ensuring that the PROACTIVE outcomes meet the needs of both LEAs and the vulnerable civil society. The Advisory Board is being extended throughout the life of the project through a permanent new members recruitment process.

The External Ethics Advisory Board (EEAB) includes several independent ethics experts. The EEAB will provide advice and suggestions on the solutions and results of the project and will supervise the data protection and ethical issues of project research development, ensuring the PROACTIVE research activities and tools developed comply with ethical standards. 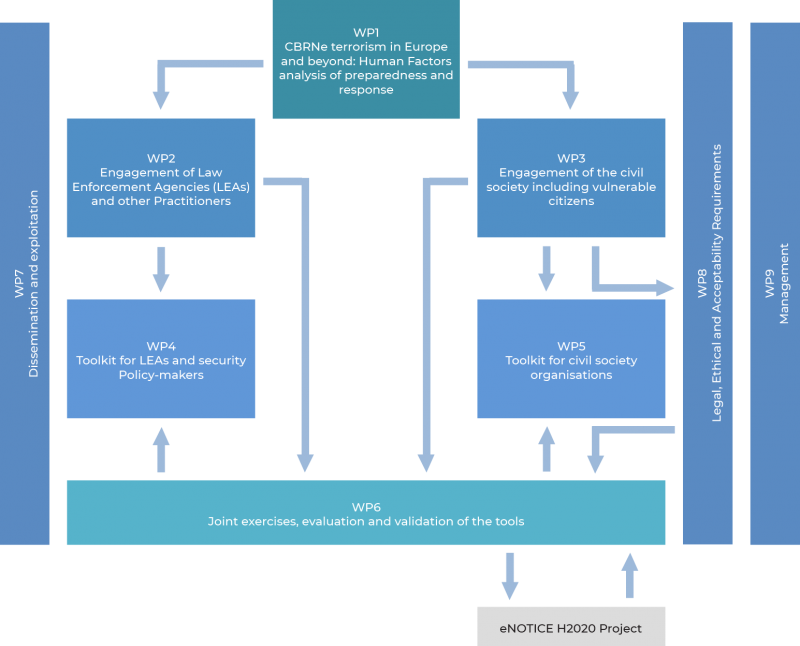 This project receives funding from the @EU_H2020 Research & Innovation Programme. Any related tweets reflect only the views of the project owner. 🇪🇺 #CBRNe

On this #WorldHealthDay, #PROACTIVE_EU is especially thankful for all the medical #CBRN responders putting their lives on the line in the fight against #Covid19🦠We are proud to count medical practitioners among our Practitioner Stakeholder Advisory Board #PSAB 👨‍⚕️👩‍⚕️🏥🩺🧪☣️☢️⚛️💣

We sent a letter to Commissioner @SKyriakidesEU bringing attention to the issues of persons with disabilities during this pandemic (such as discrimination in access to treatment and lack of protective equipment).

Persons with disabilities are especially vulnerable during the #COVID19 pandemic. This is why we are monitoring a range of issues:

At #PROACTIVE_EU, we are actively working to engage children in #CBRN exercises, thanks to help from @SaveChildrenIT. Can't wait to read this publication to learn even more about how to better include youth in #CBRNE preparedness and response!

Disasters are never gender neutral. If anything they highlight the unequal distribution of work.

Governments need to consider gender during #COVID19
E.g The high number of women health carers & cleaners to women taking on most of the caring responsibilities of their families. https://twitter.com/undrr/status/1247081014855417857

Me with a rather controversial take on this whole "resilience" definition debate: WHO CARES?! 💁‍♀️💁‍♀️💁‍♀️

📰Read the whole article for free until May 02, 2020: https://authors.elsevier.com/a/1ajfw3OQ%7EfLcPG

Many #PROACTIVE_EU project consortium partner Law Enforcement Agencies 👮‍♂️🚔, like @Valsts_policija, are part of the fight against #Covid19. Thank you 🙏🙏🙏 for all you do to protect the public against #CBRN #CBRNe threats! 🦠☣️

The EU-funded H2020 project PROACTIVE led by the UIC Security Division held its third consortium progress meeting and its first public workshop last week. The meeting was supposed to take place in Münster, Germany between 17 – 19 March 2020 at the kind invitation of the German Police Academy (DHPol), but in light of the COVID-19 global context, it was decided to adapt it to an Read more…

Register here: https://uic.org/events/proactive-psab-workshop The EU-funded H2020 project PROACTIVE led by the UIC Security Division will soon hold its first public workshop in Münster, Germany on 19 March 2020. The event will be hosted by the German Police Academy which is one of the consortium partners. The workshop will discuss public Read more…

January was a busy month for the EU H2020 funded project PROACTIVE (PReparedness against CBRNE threats through cOmmon Approaches between security praCTItioners and the VulnerablE civil society) coordinated by the UIC Security Division. The project held its second Progress Meeting from 14 – 16 January 2020, in London. So far, the technical work packages are Read more…

The meeting was chaired by Mr Franco Fiumara, chairperson of the COLPOFER group and also Director of Security at FS Spa. He presented some innovative solutions developed at FS to address security threats in passenger services and underlined the role of COLPOFER in developing cooperation on security at the operational level. Up next, the Czech railways presented Read more…

The 15th UIC World Security Congress, co-organised by the UIC Security Division and Czech Rail Infrastructure Manager SŽDC, was a successful opportunity for UIC members to share and discuss the safety and security of stations. More than 150 participants from 26 countries all over the world had the opportunity to exchange best practice and discuss the conference Read more…

The PROACTIVE EU project, coordinated by UIC's Security Division, is on the right track for success

The PROACTIVE (PReparedness against CBRNE threats through cOmmon Approaches between security praCTItioners and the VulnerablE civil society) project, funded by EU Horizon 2020, has recently achieved a number of important milestones. The project group held its first progress meeting, General Assembly and Executive Board meeting on 17 and 18 September at UIC Read more…

Today, about one week before the PROACTIVE PSAB workshop, we are pleased to announce that we intend to run the event as initially planned. 🧪☢️☣️⚛️💣🚓🚑🚒♿️ For those who can no longer travel, a teleconference system will Read more…

Registration for the PROACTIVE PSAB workshop is now open! Click here to register!

The PROACTIVE & eNOTICE Progress Meeting Exercise pre-planning workshop was held on the 16th of January 2020 at the East India Club in St. James Square, London, England. It was a lovely opportunity for the Read more…

Our 2nd Progress Meeting a Success!

The 2nd PROACTIVE Progress Meeting took place in London, England and was hosted by consortium partner CBRNE Ltd on the 14 – 15 January 2020. A great way to kick-off the new year! Partners shared Read more…

After eight months of hard work and a ridiculous amount of reading, the PROACTIVE consortium is proud to present the Legal and Ethical State-of-the-Art when it comes to CBRNe preparedness and response. The deliverable provides Read more…

After eight months of hard work and a ridiculous amount of reading, the PROACTIVE consortium is proud to present our two systematic reviews of the current state of CBRNe. The first review is focused on Read more…

PROACTIVE partners were invited to attend a field exercise hosted by the Dortmund Fire Department on the 21st of September 2019 as part of a joint activity ran by the EU H2020 project eNOTICE. Dortmund  Read more…

PROACTIVE attends the 14th Community of Users meeting in Brussels

The PROACTIVE project was invited by the European Commission to attend the 14th Community of Users on secure, safe and resilient societies thematic workshop, focusing on Citzen’s Awareness. The day started with presentations from projects that Read more…

This project has received funding from the European Union’s Horizon 2020 research and innovation programme under grant agreement No. 832981